By Bailey Fernandez and Erik Maloney

Bland Simpson, Kenan Distinguished Professor of English & Creative Writing in the Department of English & Comparative Literature, has been inducted into the North Carolina Literary Hall of Fame.

Simpson has written several novels, short stories, musical and theatrical works, and works of creative nonfiction. His “nonfiction novel” The Mystery of Beautiful Nell Cropsey (1993) tells of the 1901 disappearance of a nineteen-year-old girl in Elizabeth City, North Carolina, and the national sensation the case evoked. Ghost Ship of Diamond Shoals (2002) reconstructs the mysterious final voyage of the Carroll A. Deering, found wrecked and deserted in 1921 on the Diamond Shoals of Cape Hatteras. Two Captains from Carolina (2012) narrates the lives of two nineteenth-century mariners—one African American and one Irish American—in the antebellum South and the Civil War era. Simpson is also a musician who plays piano with the Tony Award-winning Red Clay Ramblers.

Simpson has served as a chronicler of the changing ecological landscape of North Carolina, as well as the threats to that landscape. He grew up near the Great Dismal Swamp and authored The Great Dismal: A Carolinian’s Swamp Memoir (1990), which employs life-writing and natural history to evoke one of the state’s most intriguing and elusive ecosystems. He and his wife Ann Cary Simpson have been described by the Charlotte Observer as people who “have spent their lifetimes sharing their love for North Carolina’s coastal waters” in a series of texts illustrated by Ann’s photographs: Into the Sound Country (1997), The Inner Islands (2006), and Little Rivers and Waterway Tales (2015). He recently cotaught a creative nonfiction course on “The Changing Coasts of Carolina.” 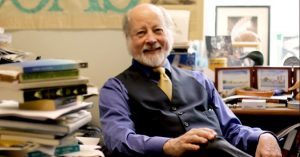