By Bailey Fernandez with Erik Maloney

Entering Professor Marianne Gingher’s Greenlaw Office is like walking into a carnival wagon or a circus dressing room. The walls are colored bright red, and they are decorated with posters, miscellaneous American memorabilia, and puppets. Three stand upright on the desk between Professor Gingher and me; several stand next to the door; there’s a whole stack at the back of the room, and throughout our interview she will pull out a dozen more from drawers and file cabinets.

She is coming off the success of her first year seminar, the English 89 class “Writing for the Puppet Stage.” The course was funded by a faculty support grant from UNC BeAM’s Makerspace. These grants help instructors incorporate Makerspace resources into their classes, with the goal of making students comfortable with the hands-on use of state-of-the-art technology and providing them with skills that will prove useful in their professional careers.

The seminar thus demanded direct work with materials while also surveying the history of American puppetry. Only two students in the course identified as potential humanities majors. As Gingher puts it, “These are kids who…had never mixed paint. They didn’t know how to thread a needle.” The class gave them an opportunity to get their hands dirty and try new things as they studied a performance tradition that was totally novel to most of them. She taught and recommends John Bell’s Strings, Hands, Shadows: A Modern Puppet History, and students composed a total of six theatrical writing assignments throughout the semester, leading up to the final show.

Students were required, Gingher writes, “to take an orientation at Makerspace and then to train in one or more technologies, depending on how they wanted to incorporate Makers resources into their puppet-making projects. Some used the 3D printers to make pendants for puppets to wear; some used woodworking to build props; most of them certified in sewing to make simple costumes for puppets.” Her real goal was “to introduce them to the Makers resources as first-year students. They will have many semesters ahead of them to develop skills there.”

She and her students finished the Makerspace course by presenting the puppet show “The Animals Among Us.” It represents the culmination of a semester’s worth of learning about the history and craft of the puppet stage. For the show, she had the students engage in “a bit of a competition. At the end of the semester, we divided into three theater companies. And each theater company…had to come up with a little play—a five to ten minute play—in which all of them had a role. And they had to brainstorm a script; they had to make prototypes of puppets they could later develop, and then perform them. And the whole class would decide which one out of the three we would include in the final.”

The puppetry seminar “was one of the few places where I could build what I wrote,” said Tianyi Peng, a student in the course. “It was embarrassing at first to make masks and sing songs in front of your classmates, but everyone was in the same boat, and by the end of the semester everyone was really invested in the final show.”

For Peng, the puppet stage encouraged students to hone their creative writing skills and offered an accessible entry point to the performing arts. “Puppetry forces you to distill the story and leave only the most important and expressive details for your audience, which results in slice-of-life shorts that are easier to perform but can still be as impactful as larger productions. Because of the smaller scale and the tendency for puppeteers to do everything from the script to the stage, I feel that a puppetry course could be a good introduction for people who are interested in entering the performing arts, as it allows them to do a bit of every role.”

Other students spoke of the seminar in similarly glowing terms. “I was not expecting to take a puppet-making class my first semester at UNC,” said Lily Dickinson. “It was one of the best decisions I have ever made. The class opened my eyes to the power that puppetry has in making powerful statements, sharing ideas, and building a community. This class provides an example of how art and education can fit seamlessly together. It shows how students with different skills, artistic and otherwise, can create something monumental. This class should be a general requirement for all students in all majors. Everyone deserves to be a puppeteer for a moment.”

Gingher’s own work in the puppet theater has spanned a decade, involving traveling puppet shows and performances at the Puppeteers of America Foundation. Describing herself, she tells me: “I’m very much a material person—I like to have my hands in a mess.” Her troupe has taken a two-year hiatus, and she “was just missing it,” so she “wanted to try [a seminar on] writing for the puppet stage, writing for the tiny stage.”

Although the semester is over, Gingher’s puppet plans for the department continue. “Going forward,” she says, “I would like to teach the class again. I’m looking to teach it as a first year seminar in the fall again. And then I may try to finagle a way to teach it as part of the creative writing curriculum.”

In future versions of the course, she looks forward to using Makerspace resources to further enrich students’ learning experience. “Going forward, I can certainly see that if students wanted to make ‘crankies,’ for example”—moving panoramas that combine shadow puppetry with illustrated scrolls—“Makers would offer heaps more resources.” 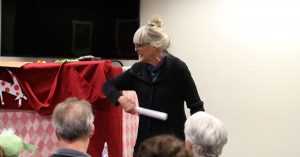