Gabrielle Calvocoressi, an Associate Professor in the Department of English & Comparative Literature, and Marina Greenfeld, an undergraduate student double-majoring in English and Slavic Languages with a Creative Writing minor, worked together to create Bounty Everlasting, a chapbook celebrating the twenty-fifth anniversary of the periodical Southern Cultures. Though an undergraduate, Greenfeld was named one of the editors of the chapbook. Greenfeld is entering her fourth year as an editorial assistant for Southern Cultures, where Calvocoressi has served as poetry editor for two years.

Southern Cultures, a peer-reviewed quarterly published by UNC Press, explores the history, politics, literature, and art of the South through essays, fiction, poetry, and photography. Bounty Everlasting was compiled from poems that had previously appeared in the journal. Calvocoressi and Greenfeld chose sixteen poems to include after reading through hundreds of candidates.

The authors chosen include three UNC faculty members: Michael Chitwood, who has twice won the Roanoke-Chowan Award for Poetry; Michael McFee, who won the 2018 North Carolina Award for Literature; and Natasha Trethewey, who was appointed United States Poet Laureate for 2012 and 2013.

According to Calvocoressi and Greenfeld, Bounty Everlasting creates a communal space for past, present, and future southern writers. They hope it challenges and expands people’s view of the South. 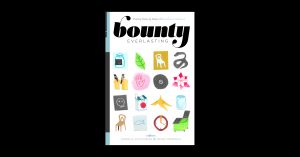