By Bailey Fernandez and Erik Maloney

On October 21, ECL Teaching Associate Professor Michael Keenan Gutierrez made an appearance on the podcast produced by the Institute for the Arts and Humanities. He and anthropology professor Caela O’Connell visited the podcast to discuss their projects’ relationships to climate change.

Discussing such projects has communal implications. As Gutierrez says in the podcast, “One of the things art can do is help the audience imagine something they find difficult to imagine.” For him, this has manifested in the creation of a novel set in an imaginary town devastated by ecological disaster. From there, one can imagine the choices that people might make and the problems that may arise, and potentially offer a warning about the darkness of a future ravaged by ecological collapse. Listen here.

Gutierrez has been widely published in outlets such as The Guardian, The Delmarva Review, The Pisgah Review, and The Boiler, and his work has competed for prestigious literary awards, garnering two nominations for the Pushcart Prize. In his previous book, The Trench Angel, a historical novel set in 1919 Colorado, a traumatized photographer must come to terms with his experiences of trench warfare in World War I as he investigates a murder against the backdrop of a coal miners’ strike. 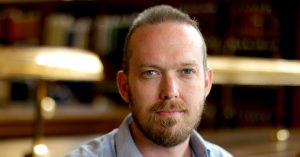