“I should like balls infinitely better,” says Elizabeth in Jane Austen’s Pride and Prejudice, “if they were carried on in a different manner; but there is something insufferably tedious in the usual process of such a meeting. It would surely be much more rational if conversation were made the order of the day.” Attendees of the Jane Austen Summer Program (JASP) are likely to find both orders of business. Balancing academic panels with hands-on workshops and its very own Regency Ball, the weekend serves to connect scholars with the general public in both academic and carnivalesque form.

For its seventh year, the program chose the novel Pride and Prejudice, along with its adaptations, for its theme. Some adaptations included as “suggested reading” were the novels Unmarriageable, by Soniah Kamal; Ayesha at Last, by Uzma Jalaluddin; and Pride, Prejudice, and Other Flavors, by Sonali Dev. All three of these authors gave interviews and Q&As at the event, reflecting the collisions of literature and life that characterize the conference.

The program was cofounded by two of UNC’s own English & Comparative Literature faculty: James Thompson and Inger Brodey. Thompson has published three books specifically on Austen, and Brodey has published dozens of articles and book essays. Both have given presentations on Austen at conferences and at Austen societies around the world. Thompson delivered an address to this summer’s event entitled “Why Pride and Prejudice?”

Professors Laurie Langbauer and Beverly Taylor have also been involved in JASP from the start and colead a discussion group each year as part of the events. Every year, an ENGL 340 class is offered to coincide with the event, and the students in the class present their research to the assembled audience in a poster session. This year ENGL 340 was taught by Michele Robinson.

ECL graduate students also participated in panels at JASP, including Anne Fertig, Grant Glass, Jane McGrail, Michele Robinson, Emily Sferra, Sarah Schaefer Walton, and Carlie Wetzel. Their participation ranged from chairing panels to giving their own presentations, which included McGrail’s “Pride and Prejudice and Zombies” and Fertig’s analysis of board games based on Austen’s novel. Beginning in 2020, Walton will also serve as Associate Director of JASP. The graduate students’ production of one of Austen’s teenage writings, or juvenilia, is a highlight of JASP. The productions are written and directed by ECL alumnus Dr. Adam McCune. The 2019 play was “Love and Friendship.”

Planning is already underway for the Summer 2020 program, entitled “Jane Austen’s World.” It will take place from June 18–21, and the reading for the 2020 program will be Jane Austen’s letters and Claire Tomalin’s biography Jane Austen: A Life. 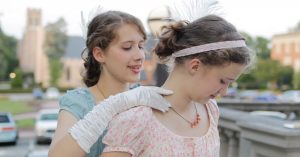