On Friday, October 4, from 11 a.m. to 12:30 p.m., undergraduates interested in literature and writing should come to Greenlaw Day, on the first floor of Greenlaw Hall, to learn more about the BA in English & Comparative Literature and to celebrate the history of the department. Join us to learn about the newly redesigned concentrations in ECL, meet faculty, and decorate Greenlaw with quotations. Free candy will be provided, and attendees get to pick out a free book.

Greenlaw Day celebrates the forty-ninth anniversary of the opening of Greenlaw Hall, which today houses the ECL department. The building was named after Edwin A. Greenlaw, an English scholar and administrator who taught at UNC from 1913 to 1925. His books include Selections from Chaucer (1905), The Province of Literary History (1931), and Studies in Spenser’s Historical Allegory (1932). Greenlaw was one of the most prominent figures in the development of the department. He increased the number of faculty from eight to thirty-two and started the process that established UNC’s English Department as one of the premier departments in the country.

Beyond the UNC campus, Greenlaw played a pivotal role in larger debates about the role of English in college curricula and the way literary scholarship should be pursued. For Greenlaw, serious literary study amounted to a comprehensive study of civilization: to promote his views, he edited influential anthologies such as Literature and Life (1922) and, with his UNC colleague James Holly Hanford, The Great Tradition (1919), which offered Selections from English and American Prose and Poetry, Illustrating the National Ideals of Freedom, Faith, and Conduct. For more on Greenlaw’s pivotal role in the development of English literary studies as a profession and a discipline, see Professing Literature, by Gerald Graff, who refers to the “generation of Greenlaw” (215). 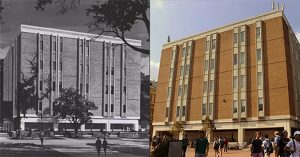