Outside the Ackland Art Museum this August, passersby might have noticed the towering kettle-like sculptures presiding over the entrance. These figures composed an installation known as Step Right Up, the first large-scale site-specific installation commissioned by the museum in almost two decades and the product of the hard work of UNC Department of English & Comparative Literature’s 1967 alumnus Patrick Dougherty.

After beginning his career by studying in our English department, Dougherty later returned to the university to study sculpture and art history. His work most frequently consists of large-scale sculptures constructed from natural materials. Step Right Up, continuing this trend, comprises five immense jugs built from locally harvested tree saplings in a process Dougherty calls “stickwork.” Assembled with the assistance of almost two hundred volunteers, these structures—big enough for viewers to walk inside—exemplified the environmental art that has made Dougherty famous, a body of work that has earned him multiple awards and grants including a National Endowment for the Arts Fellowship.

Fans of “land artists” such as Michael Heizer may see a similarity between these “stickworks” and installations like Heizer’s Double Negative and Levitated Mass. These structures not only express the creativity of the artist but also alter and become part of the surrounding landscape. Likewise, Dougherty’s sculptures include the materials of their region and reflect the surrounding area.

The installation was taken down on August 31, but you can follow Dougherty’s work on his website and keep up with the Ackland Art Museum’s programming here. 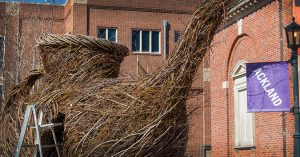