Professor Jordynn Jack of UNC’s Department of English & Comparative Literature has just released her new book, Raveling the Brain: Toward a Transdisciplinary Neurorhetoric. Her innovative work, which bridges the gap between neuroscience and rhetoric, is committed to “developing a framework” to better understand neuroscientific arguments.

“A friend of mine does research in neuroscience,” Jack says, “and we started chatting about his field and the role that persuasion seems to play in it.” As a professor of rhetoric, Jack understands persuasion. The tradition of rhetoric extends back to ancient Greece, where it developed out of a culture that prized the idea of public speech, or oration. Since then, the discipline has emerged and re-emerged in constantly evolving forms. Today, it is one of the fastest growing subdisciplines in literary studies, and its applications stretch far beyond the boundaries of what has traditionally been considered literature.

Newer developments in the field of rhetoric, however, have not yet hit the sciences. “For instance,” Jack continues, “a study on the neuroscience of persuasion might cite Aristotle’s Rhetoric but none of the tremendous body of research being done by contemporary rhetoricians. But, by the same token, humanities researchers tend to privilege popular science books that, by virtue of how quickly science moves, are often out of date, presenting ‘known knowledge’ that authors often seek to popularize.” By deeply analyzing the claims and argumentative strategies of contemporary scientific papers themselves, Jack seeks to bridge the gap between two disciplines that have been thought of not only as separate but as diametrically opposed.

This is not Jack’s first foray into the links between rhetoric and neuroscience. She edited (and published an essay in) a 2012 collection entitled Neurorhetorics, which analyzes the commonalities among rhetorical discourses that cluster around the prefix neuro-.

Interested readers can purchase Raveling the Brain from Ohio State University Press. To hear more about the inspiration behind Jack’s book, read the full interview with the DLC. 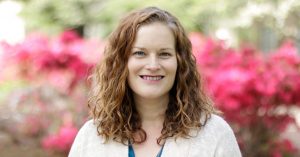