For UNC’s Department of English & Comparative Literature, the lecture and seminar by Cary Wolfe, Bruce and Elizabethan Dunlevie Professor of English at Rice University, have been highly anticipated. The event will take place in two parts: a seminar discussion entitled “Antireductionism in Deconstruction and Theoretical Biology” on Wednesday, September 25, at 3:30 p.m., in Greenlaw Hall’s Donovan Lounge; and a lecture entitled “Autoimmunities” on Thursday, September 26, at 3:30 p.m, in Dey Hall’s Toy Lounge. Both promise to offer an exciting opportunity for ECL students and faculty to engage with contemporary debates in literary theory.

Wolfe is a thinker and critic who has written on posthumanism, ecocriticism, and American Romanticism. His first book, The Limits of American Literary Ideology in Pound and Emerson, analyzes the work of two great American writers separated by a century—Ralph Waldo Emerson, the great American Transcendentalist; and Ezra Pound, the modernist and Imagist poet who reinvented American poetics. His more recent work has included the books Animal Rites: American Culture, the Discourse of Species, and Posthumanist Theory and What is Posthumanism?, both of which intervene broadly in debates around bioethics, animal studies, gender, cognitive science, and disability. His upcoming publications are “Ontogenesis beyond Complexity” and Ecological Poetics; or, Wallace Stevens’ Birds.

Wolfe’s visit is sponsored by ECL’s Critical Speaker Series. More information can be found on the event page here. 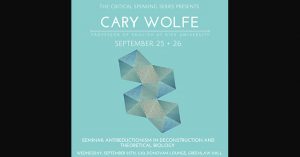