Emily Long, an English and Biology double major with a minor in Medicine, Literature and Culture, offers a fascinating look at how one student has managed to combine the two fields of study that interest her most— STEM and literature— no matter how distant they may originally seem. By doubling up, Emily has not only learned how humans operate in the physical world around them but has also been afforded the opportunity to dive deeper into why humans interact with their world in the ways that they do.

“Biology wasn’t asking all the questions I wanted,” Emily says. “To me, a true liberal arts education with both science and humanities courses was the way to start pursuing those elusive questions about morality and human nature.”

By combining her studies in biology and medicine with English and Comparative Literature, Emily felt she was able to gain a more comprehensive understanding of all the topics that intrigued her without restrictions.

Throughout her undergraduate career, Emily has carved out multiple spaces for herself to further explore these questions and connections, not only serving as the current Editor in Chief of the Health Humanities Journal and as a S.U.R.F. grant researcher, advised by Dr. Jane Thrailkill, but by completing a Senior Honors Thesis under Dr. Eliza Richards as well.

The Health Humanities Journal, in particular, has provided an excellent outlet for the reconciliation of STEM-based and literary forms of expression in the print medium, and as Editor in Chief, Emily has made sure to represent both equally.

“The Health Humanities Journal was founded in 2016 [by Manisha Mishra] as a supplement to the goals of the Health and Humanities: An Interdisciplinary Venue for Exploration (HHIVE) Lab,” she explains, “as a means of providing a space for interdisciplinary conversations centered on the growing health humanities field. We publish one issue per semester with everything from narratives and poems to research and artwork and we are thrilled to be receiving submissions from undergraduates, graduate, and professional students, medical, nursing, and public health students, and faculty from UNC and beyond.”

By involving a larger community, it was clear how impactful the Journal’s work had become when it came to such interdisciplinary discussions. But how did studying English impact Emily directly, and prove itself useful in the real world?

“English teaches a plethora of skills that are useful for nearly any career,” she says, “it’s learning to craft a compelling argument, develop analytical skills, and write persuasively, which are skills you need any time you apply for a job, opportunity, or grant and nearly any time you communicate with others.”

Throughout her courses in English, Emily realized that the major was the perfect complement to her career path, especially in a STEM field that involves daily interaction with patients and other medical professionals. That emphasis on communication and human connection that her English studies provided were exactly what she needed to succeed in her personal S.U.R.F. research project, which dealt with health care experiences in poverty-stricken regions of rural Appalachia.

“I went to Dr. Thrailkill’s office hours because I was really interested in her Medicine, Literature, and Culture class, and one of the first questions she asked me was where I was from,” Emily explains when asked about how she came up with her research project, “ and I said I was from a small town in the Appalachian Mountains, which I had never thought too much about.”

Dr. Jane Thrailkill is currently a Bank of America Honors Term Associate Professor here at UNC who teaches a variety of courses in American literature and health humanities in the Department of English and Comparative Literature and is known for her passion for interdisciplinary research.

“Dr. Thrailkill had the insight to see this as a unique opportunity.” Emily continues, “and the idea to research and apply for a SURF grant stemmed from that conversation, and Dr. Thrailkill was kind enough to agree to be my mentor for my research the next summer.”

What started out as a casual conversation with a professor about her hometown soon blossomed into a life-changing experience not only for Emily but the community with which she worked when conducting her research. A large number of participants, thanks to her project, received bloodwork for free for the first time, and 76% of attendees reported that they planned to make a lifestyle change as a result of information learned at the health fair.

“This research was also one of the highlights of my undergraduate studies because I got to make a tangible impact on my community,” she says, “I’m also thrilled to be able to say that the health fair is now an annual event in my county.”

Additionally, her recent Senior Honors Thesis under the direction of Dr. Richards, which explores the portrayal of “mad women” in both literature and film, has been selected for Highest Honors.

“This is my first substantial foray into some semblance of academic writing,” Emily says, “so I’m enjoying the challenge of learning so much so quickly and getting to delve deeply into a topic that I’m passionate about.” 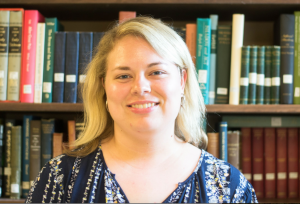