Dr. James Kimball King, Professor Emeritus in the English and Comparative Literature department who taught for 40 years and adjunct professor in the Dramatic Arts department, passed away on April 26.

Dr. King’s research and publications focused on dramatic literature. During his time in the department of English and Comparative Literature, he authored and edited thirteen books, published nearly 100 articles, and delivered more than 40 talks on the subject. He also served as vice-chair on the Playmakers Advisory Board.

Dr. King received a Tanner Award for Excellence in Undergraduate Teaching as well as two other teaching awards. Over the course of 25 summers, Dr. King took more than 1,000 students to study theatre in London. After retiring, he taught at least one online drama course per semester for the UNC Friday Center.

In lieu of flowers, Dr. King’s family requests that donations be made to the Playmakers Repertory Company, the Chapel of the Cross, or the Friday Center. 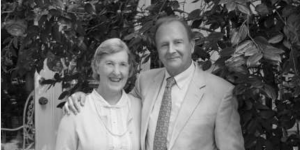