The inaugural UNC Veterans Writing Workshop will take place on Saturday, April 27 in the Carolina Union. The two-part event will begin with a panel discussion led by four veterans discussing the ways in which American popular culture has impacted the divide between the military and civilians. The panelists are Joe Kassabian (author of The Hooligans of Kandahar), Eric Burke (Civil War historian and enlisted infantryman in Afghanistan and Iraq), Kate Dahlstrand (Civil War and Reconstruction historian, Director of University of Georgia’s Student Veteran Oral History Project, and a Global War on Terrorism enlisted combat vet), and Michelle Moyd (East African military historian and former United States Air Force officer). The writing workshop will consist of exercises and activities encouraging participants to work on their stories with trained facilitators providing assistance with the specific skills involved in generating, shaping, and revising a narrative.

Davis Winkie (PhD student, soldier in the NC Army National Guard and co-organizer of the event) was inspired by a course project while working on his PhD program in military history. Winkie emphasized the idea of the “civ-mil divide,” the disconnect between servicemembers and other members of society. “American popular culture has a tendency to portray all servicemembers and veterans as trigger pullers doing heroic things,” says Winkie. “This event aims to push back on this reality from one end by having a panel of veterans discuss the impact of popular narratives of war on their military experience” as well as provide local veterans with a venue to voice their own stories.

Paul Blom, a PhD student in English and Comparative Literature and co-organizer of the event, hopes that members of the public will learn about the diversity in military experiences, that “no two people’s military experiences are exactly the same.” The goal is to demonstrate that  each veteran ”has a unique voice that deserves to be heard,” says Blom.

The event with take place in Carolina Union Room 3048 from 10:30-4 on April 27th. The panel discussion is open to the public and no registration is needed, and veterans may register for the second part of the event here. 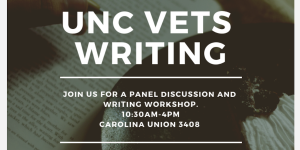