Dr. Howard Harper, who taught in the English and Comparative Literature department for 43 years, passed away on April 12.

Between college and graduate school, Dr. Harper served three years of active duty as a Naval officer supporting UN peacekeeping troop transport following the Korean Conflict. He continued to serve in the Naval Reserve, retiring with the rank of Commander in 1990. In 1964, he earned his PhD in English from Penn State University and moved his young family to Chapel Hill, NC. He joined the faculty of the English department at UNC where he instructed and inspired undergraduate and graduate students for 43 years.

His research and publications addressed 20th century British and American fiction, and many students remember him fondly from his Film Criticism course. He had many friends in the UNC community and was a member of University Presbyterian Church. He was known for his studious nature, keen intellect, and infectious smile. His presence will be deeply missed.

In lieu of flowers, Dr. Harper’s family requests that donations be made in his honor to UNC Hospice or a charity of choice. 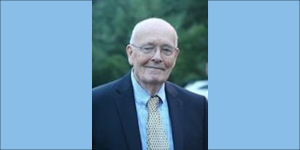