Reflecting on how his life experience has contributed to his current work in the committee, Cobb says “[growing up,] I was not openly discriminated against, but looking around the class and not seeing any black faces for the better part of nine years reveals the spaces in which Blacks are and are not welcome.” He continues, noting, “I also existed on the other side of this line. Sports were a space in which a certain type of blackness was expected, but my friends on the team lived different lives and came from exceedingly different backgrounds.” This experience has informed Cobb’s understanding of the nature of diversity. He notes that “I understand a person as not adherent to a particular category.”

This perspective on diversity has influenced Cobb’s initiatives within the department. When asked about how the department’s faculty and curriculum could be improved to increase diversity, Cobb identified diversity of faculty members as a key component of improving the diversity of the department. He notes that ensuring that higher education includes a diverse group of people encourages more diversity in the students who pursue careers in academia. Reflecting on his time in college and graduate school, he says “as a college student, I had no close connections to a professor of color. I only knew that I loved to analyze texts because they revealed something to me about the world. Working at UNC with GerShun Avilez has made the reality of being a scholar less abstract.” By promoting a faculty of diverse scholars, Cobb believes that the department can help further such connections between the faculty and student body.

In the undergraduate courses that he teaches, Cobb also strives for an ever-increasing diversity of authors, aiming to include not only writers of color but also female and LGBTQ authors. In fall 2017, he taught Intro to Fiction, which allowed him to design his own syllabus from scratch. When asked about his own curriculum development, Cobb commented on creating the class reading list, saying “though there is a lot to be gleaned through canonical works, it is equally important to understand the limitations of these works and how subsequent writers reveal these limitations. I wanted my students to understand that even the most heralded writers and works of fiction can be problematic.” This critical view of the reception of literature is in keeping with the spirit of inclusion and community that Cobb promotes in all of his work on campus. For more information about James Cobb and the Diversity & Inclusion committee, click here. 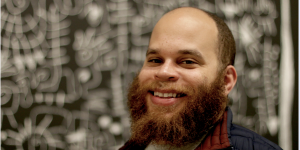