GIVE
Home / Uncategorized / UNC Alumni David B. Woronoff to be inducted into the NC Media and Journalism Hall of Fame

David B. Woronoff is one of the five honorees who will be inducted into the NC Media and Journalism Hall of Fame during a ceremony on April 12, 2019. The NC Media and Journalism Hall of Fame honors “exceptional leaders with ties to North Carolina who demonstrate leadership in their spheres of influence; service to the professions and society; performance exemplifying the highest professional standards; and commitment to inspiring and advancing young people in media and journalism careers.” Woronoff, president and publisher of The Pilot of Southern Pines, graduated from UNC Chapel Hill in 1988 with a bachelor’s degree in English.

Woronoff began his illustrious career in journalism at the News & Observer in Raleigh, NC after his graduation from Chapel Hill. He went on to work at Greenville News in South Carolina and The Anniston Star in Alabama. Woronoff is now the president and publisher of The Pilot of Southern Pines, a twice-weekly local newspaper that has grown into a statewide media company. The Pilot publishes four regional magazines: O.Henry and Seasons in Greensboro, Salt in Wilmington, and Pinestraw in the Sandhills. The Pilot also publishes Business North Carolina, a business magazine focusing on unique aspects of North Carolina’s thriving economy. The company also owns The Country Bookshop, a 65 year old bookstore in Southern Pines.

The ceremony will be led by CNN’s Senior White House Correspondent Pamela Brown at the Carolina Inn. All proceeds from the event go towards supporting the UNC School of Media and Journalism. 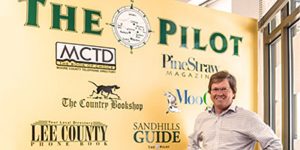