Anne Fertig, a doctoral student in English and Comparative Literature Department at UNC, curated an exhibit currently on view at Wilson Special Collections Library about the Scottish Gaels in North Carolina, with the aid of Dr. Michael Newton and Visiting Lecturer Dr. Tiber Falzett. Drawing on the wealth of archival resources in Wilson Library’s Special Collections, this exhibit exploresthe beliefs, experiences, and traditions of the Scottish Gaelic-speaking community in North Carolina. Tracing the Scottish Gaels’ stories from their initial immigration to the American South to their lasting influence in the twentieth century, the exhibit displays a range of pamphlets, books, and manuscripts showcasing the Gaelic language and its influence on North Carolina history. 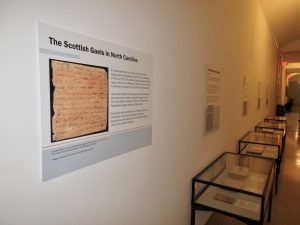 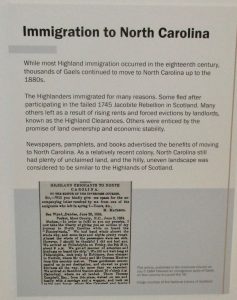 a series of events to celebrate the 2018-2019 Inaugural Visiting Lectureship in Scottish Gaelic Studies at UNC, which Anne Fertig, who studies Scottish Gaelic and Scottish literature and history, volunteered to curate.  She says, “Scottish Gaels have a long history in North Carolina, yet much of the material related to their presence here has been forgotten or lost over the years.” The exhibit celebrates the history of Scottish Gaels in North Carolina and the linguistic traditions that arose as a result of their immigration.

Featured in the exhibit is a handwritten Gaelic poem that was found within the MacLean and Thomas papers, collected documents from two families from Georgia. Fertig says of the poem: “While the poem is undated, the other documents in the collection date from around 1820-1868, so it is possible it could have been written as late as the Civil War!” The poem and other materials in the exhibit provide significant evidence that Scottish Gaelic continued to be spoken into the nineteenth century in the American South. 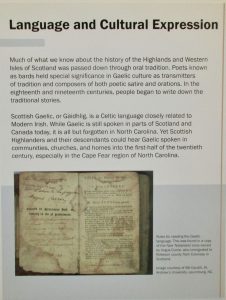 The exhibit highlights other exciting finds from the Wilson Special Collections and continues Fertig’s public humanities work, which “centers around the recovery and educational outreach of historical materials, within both Gaelic and English linguistic traditions.” The exhibit will be on view at Wilson Library through April and is free to the public. For more information about the exhibit, click here. 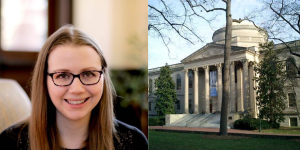