The William Blake Archive at UNC recently announced the grand opening of its newest digital wing: an Archive Exhibitions space, which allows viewers to browse through curated presentations and special topics related to Blake’s work. Its first show, now open to the public, highlights Blake’s remarkable and enigmatic depiction of the pilgrims from the Canterbury Tales. The Archive Exhibitions feature digital galleries which include both informational text and high-resolution scans of Blake’s drawings, paintings, engravings, and more. Like a museum, the curated exhibits include both contextual information and related artists’ works for comparative studies. It offers the chance to experience Blake’s work in a curated and contextualized format, rather than as simple digitized images. In the Archive Exhibitions, viewers can also magnify any image for closer study, and the digital format, free to all users, allows for easy access anytime and anywhere.

The inaugural exhibit features Blake’s painting and engraving of Geoffrey Chaucer’s Canterbury Pilgrims in four consecutive galleries. The first gallery focuses on Blake’s depiction of the pilgrims from Chaucer’s Canterbury Tales.  His painting of the scene, commonly dated to 1808, uses an unusual water-based paint invented by Blake himself and is one of his largest paintings. His subsequent engraving of the scene, made in 1810, is the largest engraving he ever created. The second gallery compares Blake’s depiction of the Canterbury pilgrims with that of a rival artist, Thomas Stothard. In addition to featuring full-sized images of the rival painting and engraving, this gallery also includes close-up comparisons of key figures in each artist’s version of the scene. The third gallery looks at Blake’s informational leaflet released alongside his engraving, which notes his emphasis on distinguishing the individual character of each pilgrim. Lastly, the fourth gallery emphasizes the critical reaction of Blake and Stothard’s contemporaries, offering a glimpse into the artistic mores of the time period as compared to our perception of the work today.

The new Archive Exhibitions wing provides an exciting new opportunity for students, scholars, and lovers of Blake to see his work up-close and in-context. The fusion of written and visual work in the Archive Exhibitions space also opens up fresh possibilities for the William Blake Archive team, creating increased collaboration among the Archive staff. As the Archive’s assistant project manager Grant Glass notes, it “pushes collaboration into a new orientation, taking into consideration both textual and visual elements.” Joseph Fletcher and Katherine Calvin curated the current Canterbury Pilgrims exhibit, while Michael Fox, Elizabeth Shand, Grant Glass, and the editors provided programming, imaging, and editorial assistance. The Archive Exhibitions wing was designed by Michael Fox with the help of Tae Lerch of UNC’s Office of Arts and Sciences Information Services. To learn more about the William Blake Archive and to view the new archive exhibition space, click here. 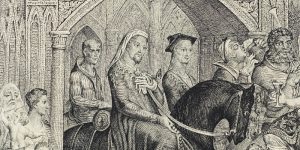