The Department of English and Comparative Literature’s Professor Michael McFee is among this year’s recipients of the state’s highest civilian honor, the North Carolina Award. The Award was created in 1961 to recognize significant contributions to the state and nation in the fields of fine arts, literature, public service and science.

A native of Asheville, Michael McFee ’76 has taught in the Creative Writing Program since 1990. He is the author of eleven books of poetry, including We Were Once Here, That Was Oasis, Shinemaster, Earthly, and Colander, and two collections of essays. McFee is a lauded poet and scholar and has received the James Still Award for Writing about the Appalachian South, from the Fellowship of Southern Writers, and the Thomas Wolfe Memorial Literary Award from the Western North Carolina Historical Association, in addition to the North Carolina Award.

In a press release, Susi Hamilton, secretary of the N.C. Department of Natural and Cultural Resources, says, “It is an honor to pay tribute to these outstanding individuals who have made North Carolina better by their extraordinary involvement in this state. Each of them has enriched the lives of North Carolinians through their lasting achievements in the arts and public service.”

For more information about the award and McFee’s work at UNC and beyond, view the video below. 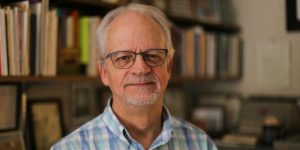