GIVE
Home / Uncategorized / Double Up with ECL’s Redesigned Undergraduate Major

This fall, the Department of English and Comparative Literature (ECL) began offering seven new concentrations within a newly revised major, so undergrads can more seamlessly pair their ECL major with natural sciences, social sciences and more. These concentrations aim to showcase the versatility of the major, with interdisciplinary focuses across STEM and the humanities, including:

Students can “follow their bliss,” says Jennifer Larson, English teaching associate professor and director of undergraduate studies, while still learning the analytical and writing skills crucial for success in a wide variety of disciplines and career trajectories.

The ability to customize the major means students are encouraged to double major with the ECL degree. Recent graduate and double-major in English and Political Science Clara Davison (‘18) is excited by the redesigned major that will afford current students to more easily follow in her footsteps. Davison, as a part of her major, took classes in medicine, literature, and culture and received a 2017 Summer Undergraduate Research Fellowship to research the role of stories in combating the stigma women with postpartum depression sometimes feel. She says of her degree, “At the end of the day, stories matter. Stories can be used to help us understand illness in a way that’s not seen in medical data.”

The study of English and Comparative Literature is made stronger by interacting with other disciplines and methodologies, and vice versa. Everything from Film Studies to health sciences benefits from translating powerful ideas across time, disciplines, and cultures, says Mary Floyd-Wilson, Bowman and Gordon Gray Distinguished Term Professor and chair of the English and comparative literature department. So, double up with ECL—it’s the perfect pairing with any other major. 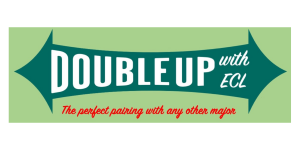